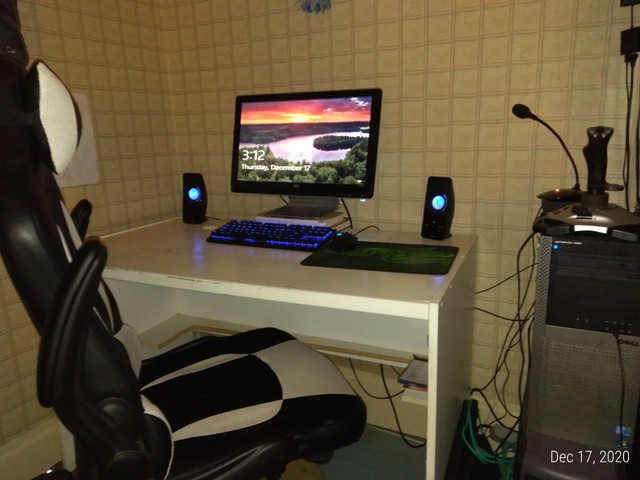 I put this together towards the end of 2019, before that was playing mostly BF on a budget laptop for the last few years, started getting back into DC and got sick of the choppy framerates esp on large maps so decided to do a budget upgrade. A lot was hand me downs or bought 2nd hand/refurbished, think I spent about $300 for everything including the desk and the chair. Does very well for what I need it for which is mostly old school gaming BF/DC, Unreal Tournament. Curious to see how it runs BFV, probably pretty well. Have tried some newish games like unreal tournament 2017 and was able to run on medium settings. If I had to upgrade anything on here it would be SSD, bigger monitor and better graphics card in that order, a computer room with a bigger desk would be really nice too

So what are you running?

by HairyRussianDude
Here is what Speccy tells me. I don;t know if I have anything to brag about or not. I literally got this built just to play Fallout 4 when it came out.

This was actually the EA117 Texas server machine, but now I'm playing on it after adding a "real" video card. Before that I was having to dual-boot my main computer to switch between gaming and real work.

I'm a big believer in buying second-hand machines. Except for the laptop, there isn't a system pictured that was purchased new or paid more than US$400. I couldn't give a crap what's scratched or dented so long as the thinking parts work. A lot of the stuff shown there is for work and nothing to do with gaming, of course. And that Nine Inch Nails poster has hung in every work office I've had since 1999.

by Sarge 1/68th Armor
Hey Kilgore, simple question.
About that rear wall. Are you playing in the bathtub?

lol, it is a really old house with lots of funky trim and wallpaper

by Col. Kilgore
right on guys

by HairyRussianDude
Vinyl on the fap area walls is just a cleanup timesaver.
I dig.

by BangBangOw<CP*SF>
Y’all have NASA grade setups compared to me, Trench’s got the whole shabang... Mali that picture is hilarious, I remember when you live streamed in discord and showed that laptop, was absolute greatness

by BlinkofanEye
Admins please prepare my most-ghettoest-player award....maybe you have a program I can apply to for a free points boost in each game???

HP8460p laptop
Win 7 64bit (alt tab muthafuckaaas)
Intel i5 2520 @2.5Ghz
8 gigs ram
240 SSD
Intel HD4000 onboard graphics
24" LG Flatron EW224 1920x1080
Logitech G403 mouse with scroll wheel that randomly reverses
Logitech KB780 bluetooth keyboard
Some mousepad from company i forgot
Samsung earbuds that my wife's friend forgot to take with her and now they're mine
3.5 mm extender so earbuds can reach me from laptop behind monitor.
Chair= tried a bunch of office and cheapo gaming chairs, ended up just taking some random chair and screwing armrests to it
A bunch of books and a board to hold up my monitor so I can slip keyboard partially under it and its at the right height. For some reason I always want the keyboard at an angle when playing, the WASD higher than the numpad side.
Sweet ass lamp that the bugs like to fly into.
50 Mbps internet > ubiqiti pico antenna shooting the wifi signal a 1/4 mile to a ubiquiti loco M3 antenna in our cabin = 6-10 Mbps rebroadcast on the M3's wifi through our cabin

I salvaged an old ass formica table that i had to cut the chrome lip off of with a sawzall so i could rest my feet on a tote under it. Also, since some jackass had previously installed a chimney ON THE ATTIC FLOOR, the whole attic and ceiling joists are sagging, making the floor slanted, so my desk and chair setup is propped up on random pieces of wood and plywood to make them flat.

I used to have my empties scattered everywhere but I pretty much quit drinking 3 months ago.

office1 (Medium).jpg
coming up from the attic ladder --- attic is a bit messy these days....

by HairyRussianDude
Blink you win lol.
I'm digging how Trench is the only person thusfar who has a professional looking setup.

by BlinkofanEye
So what about those nas stamps hairy?

by BlinkofanEye
Of your computers too

by Trench
Nah, I think Mali is eating your most-ghetto award, Blink. Your laptop has a freakin' case, an intact LCD screen and everything, like you're some kind of prima donna.

by HairyRussianDude
Ignore the dust on my fan intake. That is kind of embarrassing.

Trench wrote: ↑December 22nd, 2020, 2:17 pm Nah, I think Mali is eating your most-ghetto award, Blink. Your laptop has a freakin' case, an intact LCD screen and everything, like you're some kind of prima donna.

by Col. Kilgore
Does anyone else who wears eyeglasses have problems with wearing headsets? they pinch my ears and give me a bad headache within 30-40 mins every time, I have to go with PC speakers only.

by HairyRussianDude
Ear buds my man. That, or you COULD carve out some of the padding on your headset to fit over your glasses.
All times are UTC-06:00
Page 1 of 1