Punish Team Kill (PTK) is enabled by default on this server.

To Forgive Team Kill (FTK) when you believe
an instance of team killing was non-intentional,
you must enter the FTK command in the game console.

If someone does not FTK you correctly,
please suggest they visit "ea117.com/ftk"
to see these instructions.

On many keyboard layouts, this is the key beside the "1" key across the top of the keyboard.

When pressed successfully, this will open a white background
text area at the top of your game screen. 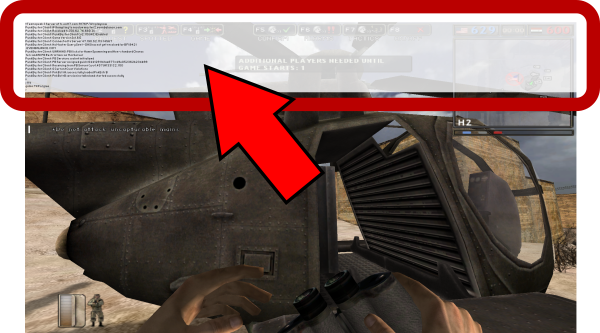 Enter the command "ftk", without quotes, and without an exclamation mark,
and then press the ENTER key.

When entered successfully, the console will display "game.TKForgive",
which is your confirmation that the command was accepted.

This will close the console and allow you to return to game controls.

Success! You have forgiven your teammate!
Also Note:
Top

Oh and if it IS intentional then type the tilde ~ drop down the screen and type PTK to punish the ahole. ;-)
Top

PTK is on by default, if you do nothing. That's why it's so important that you do it if it's a forgivable offense.

Swanny-CG wrote:PTK is on by default, if you do nothing. That's why it's so important that you do it if it's a forgivable offense.

Duh shows you what I don't know.. I thought ptk made it worse...

ptk SHOULD make it worse. to punish the noobs and idiots

I'm glad you posted this swanny...I use this all of the time. There are many cases where "I" am to blame for myself getting tkd. Why should the other player pay a spawn penalty, when it takes a couple of seconds to ftk...of course.

As far as PTK, I will type that in chat to let the other player know that I didn't like the TK even though to spawn penalty is automatic...Occasionally, I will get a "why did you ptk me you !@#$%*@...I just smile.
"Our Constitution was made only for a moral and religious people. It is wholly inadequate to the government of any other" John Adams
Top

i ftk for most everyone, except those who do it intentionally....how ever i will admit, that i give the person 10 seconds to say sorry for the tk...if they dont i do not ftk...of course it all depends on the circumstances at the time
Top

I admit, an apology does factor into whether or not I drop the console down; regs usually get the benefit of the doubt. What I know is sometimes people don't realize they've TKed; it's happened to me PLENTY of times - I die, have a long spawn time, and realize I must've. I send out a "who did I TK?" message, and "Sorry about that, whoever it was - I didn't know," as well.

Swanny, can I ftk myself with the console command if, as is SOP for me lol, I fly into my own bombs on NFZ or when hunting tanks, I aim, dive for cover, THEN fire?

In a word, is there a console command for fstk? (s= stupid, silly, self ; your choice)
Semper Rugby

Life is better just a half a bubble off dead plumb.
Top

This should be added to the in game server message as it will remind more people about it,
Top

I do get a few tks when I'm doing my thing in shilka ...what I want U guyz to understand is that I do use the mini map in shilka but I have it set on the lowest resolution ... so I can see enemy air blips from the furthest distance possible however it makes it a lil dicey discerning mixed ground targets in close combat.
the one circumstance that galls me is when I'm repairing my tank and a teammate blows up the empty tank ... and me too! this is one reason I don't use TS ... you all think I get it bad in radio chat ... I was notorious ion UG clan TS for unleashing verbal abuse
Top

Dont really care if ppl ftk me or not. Even though its not intentional I'll take the hit for being a dumbass. Most of my tks are on myself anyway, point blank rpg shots sting a bit. I'm also a klutz and regularly fall off mountins, stairs, bldgs, etc. LOL

ummm...not all of your fallings are accidents Giz

there are reason's i dont help the elderly across the street

.. Change your name from Gizmo .. to OldGeezer

LOL, you are both getting teabagged next time we play against each other!

lmao......my remark was by nomeans takin a swipe at ur age giz....lol.....your not that much older than i am......no, my remark was more to the point that its prolly me thats pushin ya down stairs, cliffs etc and for dat, i cant be trusted to walk old peeps across a street >: D
Top

Gizmo42 wrote:LOL, you are both getting teabagged next time we play against each other!

Watch your hip when you go down that low.

Props to thinking the better of people. Thinking that maybe more that 1 in 10 may actually use the ftk command. If your someone I recognize and your not a tard (short list) I'll forgive a tk. Otherwise...if there was only an asshat command that would send a bolt of electricity down the phone line to "condition" the little wankers.

I try to say sorry when I tk someone but I don't expect to be forgiven...lately guys keep running through my field of fire. One game I think I tk'd the same guy 3 times and in the same way. I'd engage and he'd run in front of me, argh!

To all you arty guys, please please use your minimap. There are tks and then there are tks. The worse ones are when you are taking a flag and you get naded or blown to bits by long range artillery. I don't know what the deal is but they always have to get in one last round...or they don't stop untill they kill a teammate.

Have you ever considered turning kickback on? It could be on a low setting...just a little reminder.

Gizmo42 wrote:LOL, you are both getting teabagged next time we play against each other!

Watch your hip when you go down that low.

And Swanny gets a double teabag LOL

I had to leave the other night because of getting tk'd. Was happening constantly for 5 or 6 maps in a row and I was just getting pissed. Dont think any were intentional but most were players being stupid.

Now THATS funny, I dont care who ya are.

I had no idea EA117's default was ptk. I remember playing on the WOLF servers for Forgotten Hope, it was a great server, but you had to remember that the default was a ptk. Gah, apologies to anyone that I might've ptk'ed unknowingly, I had no idea.

So typing 'ftk' or '!ftk' on the regular chat won't forgive a TK? Do you have to go to console?
Top

Yes, type FTK in the console.

To bring up console, hit the tilde key ` , to the left of the number 1